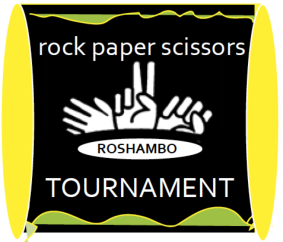 ROCK PAPER SCISSORS TOURNAMENT! Local non-profit Pajaro Valley Shelter Services in partnership with the Watsonville Rotary will play host to a competitive Rock, Paper, Scissors Tournament on Sunday, March 1, from 1:00-4:00 PM. The tournament, the first of its kind in Santa Cruz County, will be held at the Heritage Hall on the Watsonville Fairgrounds. The popular cover band Coffee Zombie Collective will keep the event “rocking” and everyone in a competitive mood. The childhood game “Rock, Paper, Scissors” used to be a way to settle a disagreement or decide who got the last piece of candy in the jar. Now it is played as a popular “sport”, where paper trumps rock and rock annihilates scissors, with all proceeds going to Pajaro Valley Shelter Services. Come spend the afternoon playing in the tournament, making side bets, and spending time at a vintage bar. Costumes are encouraged! A prize will be awarded to the top RPS winner. If you have never played before, it’s easy. Watch a few rounds and jump in. Bring your friends and challenge them to a round of Rock Paper Scissors.

Each ticket includes tournament play, and one drink. After the first drink, there is a no-host bar.
CO-SPONSORED BY KUSP.