30th Anniversary Kicks Off with Mahalo! 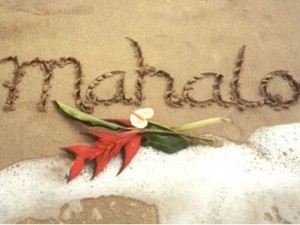 Over a hundred people attended our Mahalo! event, including over a dozen former Board Members for a reunion for the Board, donors, and families from PVSS’ programs. The event started with the reunion and glimpses of the Shelter’s history laid out in a photo gallery.

Former Board Member and niece of co-founder, Sister Marie Veronica Wagner, put together extraordinary, fun, and colorful decorations. Former Board Member Jan King organized a “$20 for $20” raffle in which everyone who donated $20 received a gift valuing at least $20. There were over 50 donated prizes – most of which far exceeded the $20 value. Pono Grill provided a genuine Hawaiian buffet and there even was a Tiki Bar, tended by Board Member Dick Frodsham.

Attendees left with smiling faces, commemorative wine glasses, and lots of little goodies from the tables.